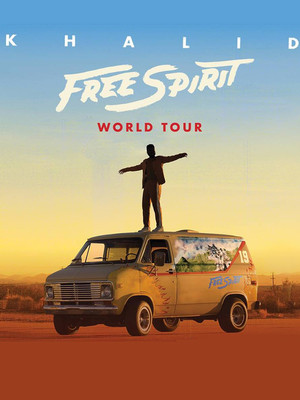 The rising R&B artist heads out on Free Spirit Tour!

Khalid's name has been all over the charts for the last two years with his second album, Free Spirit, only cementing Khalid's grip on the charts. 2019 sees the young star hit the road on his extensive Free Spirit tour! With tracks like 'Eastside', 'Love Lies' and 'Young Dumb and Broke' all to his name Khalid is the brightest new name in popular music.

Khalid's debut album, American Teen, earned the R&B singer five Grammy award nominations, including the nomination for Best Urban Contemporary Album. Now the music sensation is hoping to recreate this magic with Free Spirit, be sure to expect more of his dreamy melodies and soothing tones all wrapped up with relatable lyrics and a good dose of goosebumps!

Here is Khalid, no outfit changing, a few back up dancers, great light... more

Khalid had amazing stage Presence the seats were not too great but he... more

Sound good to you? Share this page on social media and let your friends know about Khalid at Xcel Energy Center.