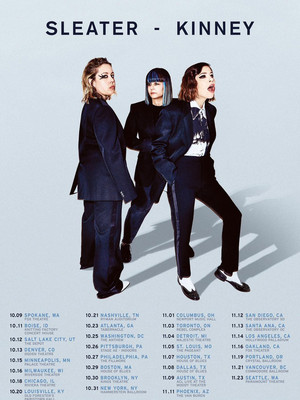 One of modern rock's greatest bands are on the comeback trail

There are few more impressive sounds in rock than Sleater-Kinney at full throttle. Comprised of Carrie Brownstein, Corin Tucker and Janet Weiss, the band honed their assault of dueling vocals and riotgrrrl ferociousness over the course of a decade, beginning with their self-titled debut and ending with 2005's The Woods. The group went on hiatus, with all three members pursuing their various solo projects (Wild Flag, Portlandia, Corin Tucker Band) until 2015, and now return once more!

The indie icons are heading on tour once more this fall in support of their much anticipated new record, 'The Center Won't Hold', their first in four years! If lead single 'Hurry On Home' is anything to go by, the trio remain just as mighty as ever.

Sound good to you? Share this page on social media and let your friends know about Sleater-Kinney at Palace Theatre St. Paul.