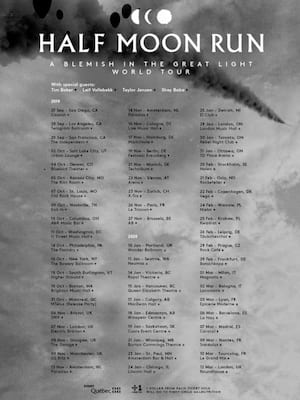 From the minute they took the stage, the four-piece had the audience captured in a euphoric trance with their emotive performance.

Why See Half Moon Run?

Canadian indie-rock group Half Moon Run have announced a stretch of shows across the USA and Canada in support of their new third album, A Blemish In The Great Light. Their first new LP in four years, the latest offering features a more experimental approach compared to the band's previous work - drummer Dylan Phillips describing it in interviews as heavier and harder, whilst still staying true to the Half Moon Run sound.

Originating in Montreal, press attempts to label the band's style have ranged from alt-pop, psychedelic rock and everything in between. Their ten-year career has seen them tour the world supporting bands such as Mumford And Sons and Of Monsters And Men, as well as selling out their own shows throughout Canada, The USA, Europe and Australia.

There is so much talent packed into these 4 back members. From flawless... more

The show was fantastic more

Sound good to you? Share this page on social media and let your friends know about Half Moon Run at Amsterdam Bar and Hall.